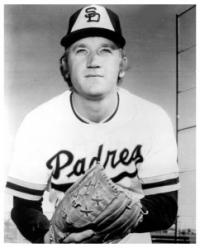 An all time fan favorite, he received standing ovations when he walked out to warm up. The Padres retired his uniform, No. 35, in 1997.