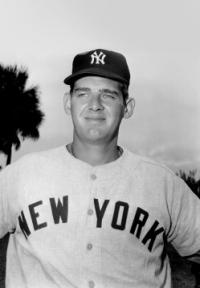 Inducted in 1964, Don Larsen is the only man to pitch a perfect game in the World Series. On October 8, 1956, against an outstanding Brooklyn Dodgers lineup, using a no-windup delivery he had adopted only two weeks earlier, Don threw only 97 pitches. He struck out seven and did not allow a man to reach first base as the New York Yankees won 2-0.

He pitched in ten World Series games for the Yankees and San Francisco Giants during a fourteen year major league career from 1953-1967. He starred in basketball and baseball at Point Loma High School.

Amazingly, the only other Yankee to pitch a perfect game in Yankee Stadium was a kindred spirit from Point Loma High-David Wells in 1998.