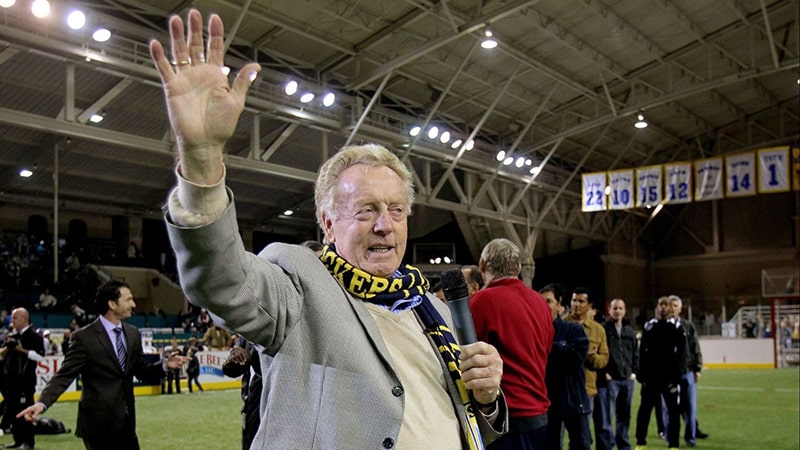 Soccer – Inducted into the Breitbard Hall of Fame in 2003

There are few people in the nation that have done as much for the sport of soccer as former San Diego Sockers’ head coach, Ron Newman. Born in Farnham, England, Newman’s career began with 13 seasons in the English Football League. He first came to the United States in 1967 to play for the Atlanta Chiefs of the National Professional Soccer League. He played out the 1967 season and won team Most Valuable Player honors, but was traded from Atlanta to the Dallas Tornado midway through 1968. Newman continued his career as a player/coach with Dallas. No one knew it at the time, but as Ron Newman’s days as an athlete dwindled, the time of his greatest contribution to North American soccer grew closer.

Ron Newman began his coaching career by leading the Dallas Tornado from 1969-1975. He enjoyed considerable success with the team, winning “Coach of the Year” honors and leading them to the North American Soccer League (NASL) championship in 1971. After leaving Dallas, Newman spent the next several years coaching the Los Angeles Skyhawks of the American Soccer League (ASL) and the Fort Lauderdale Strikers of the NASL. In 1980, however, Newman moved west to San Diego and began his long association with the San Diego Sockers. This move began one of the greatest dynasties in modern sports history, rivaling that of the great New York Yankees teams in baseball, the Green Bay Packers teams in football and the Boston Celtics teams in basketball.

Every year the challenge before Ron Newman and the San Diego Sockers became seemingly more difficult. Each year the experts said it couldn’t be done. But somehow every year Ron Newman proved the naysayers wrong by winning yet another championship. From the 1982 through 1992 seasons, a period of 11 seasons, Ron Newman’s San Diego Sockers indoor team won 10 championships. He accomplished this even though the team switched from the North American Soccer League to the Major Soccer League midway through the period. The only break in Newman’s illustrious streak came with a loss to the Tacoma Stars in the 1986-87 semi-finals. Newman’s record for championships is unmatched in North American soccer history. He won 13 during his career. His overall won-loss record is at a level is seemingly unreachable as well. He retired after the 1999 season with the Kansas City Wizards of the MLS with a record of 753-296-27. No other professional North American soccer coach has reached the 500-win plateau.

As indoor soccer grew and developed during the 1980s, Ron Newman not only guided his team to numerous championships, but developed new positions and popularized strategies that became the basis of the game today. Newman revolutionized the concept of changing lines by situating players on the bench so they could get into position faster. He also invented the “super power play,” by removing the goalkeeper in certain situations in favor of a sixth attacker. His innovative style created the defensive runner position to better utilize the Sockers’ speed on both offensive and defensive counterattacks. The defensive runner position added another dimension to the Sockers’ tactical superiority, and one of the main reasons the team continued to win year-in and year-out, despite the large player turnover, which plagued the team yearly.

Ron Newman won titles with veteran teams and with inexperienced ones, and during his tenure with the Sockers not only won 10 championships, but also dominated the leagues’ record books in both offensive and defensive categories. During the 1988-89 season for example, the Sockers became the first team in league history to lead the league in goals scored (218), fewest goals allowed (168), power-play percentage (31.2%), penalty-killing percentage (78.1%), and home record (17-7).

Ron Newman also won championships in every league he has coached, the sole exception being the most recent, Major League Soccer. He is the only coach to be named “Coach of the Year” and win league championships in the MSL, the NASL Indoor, the NASL Outdoor, and the American Soccer League. He is the only person named “Coach of the Year” twice in the NASL outdoor (1977, 1984), and he is the only San Diegan to be voted into the National Soccer Hall of Fame, an honor that was bestowed upon him in 1992.