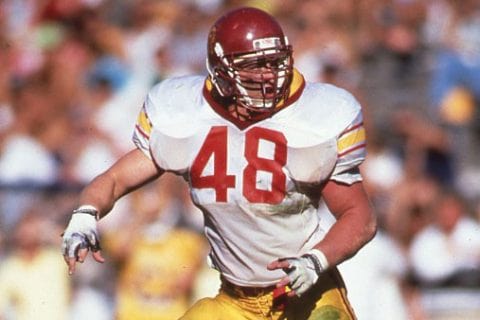 Football – Inducted into the Breitbard Hall of Fame in 1973

Ambrose “Amby” Schindler was an elusive, high-stepping ball-carrier for USC’s Trojans in 1936, 1937 and 1939, missing the 1938 season while recovering from knee surgery. He was named MVP of the 1940 Rose Bowl as he led USC to a 14-0 win over Tennessee. Amby scored a rare grand slam when he was named MVP that same year in the 1940 College All-Star game in Chicago against the NFL champion Green Bay Packers.

Amby captained the track team at San Diego High while participating in the high hurdles and high jump in addition to his football prowess for the Cavemen. He also was a teammate of Ted Williams in American Legion baseball in San Diego. After Navy service during WWII, he was the first football and track coach at El Camino College in the Los Angeles area from 1947 to 1958, and was later inducted into the El Camino Hall of Fame for coaching the school’s first championship football team.

Amby has revealed a troubling secret about one of the Trojans’ big games against Notre Dame. In their 1936 contest, he set up near his own 10-yard line as the returner of an Irish punt. He let the ball bounce, tried to get away from it, but was horrified when the ball grazed his leg and rolled into the end zone where several of the Irish fell on the ball for an apparent touchdown. But none of the game officials had a clear view of the play and ruled the play a touchback, and thus USC’s ball on the 20 with no Notre Dame score. Racked with guilt feelings, honest Amby approached the referee to tell him what had actually happened. But, realizing that he was about to ‘fess up, his teammates bodily carried the protesting Amby off the field and ordered him to keep his mouth shut. The Irish were thus deprived of the winning touchdown and the game ended in a 13-13 tie. A year later, Amby met some of the Notre Dame players, told them what had happened, and had to endure their fury about being deprived a treasured victory against their arch-rival Trojans.