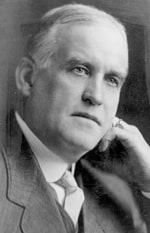 He later bettered that by 2.8 seconds, but absent an official timer, the mark was not recognized.

A San Diego High School graduate, Fletch captained the national champion Stanford Water Polo Team in 1924 and was selected to the All-American swim team in 1922, 1923, and 1924.

Studies at Oxford University precluded his competing in the 1924 Olympics. Part of a pioneer San Diego family, Fletcher founded Home Federal Savings and Loan in 1934 and was elected to Congress in 1946.