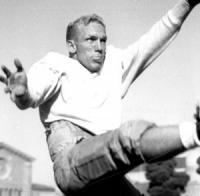 Inducted in 1959. Irvine “Cotton” Warburton was a consensus All-American quarterback at the University of Southern California and later an Oscar winning film editor at Walt Disney Studios.

Though only 148 pounds, he scored two touchdowns each in great performances in the 1933 Rose game, in which the Trojans crushed Pittsburgh 35-0, and in USC’s 19-0 victory over Notre Dame later  that year.

He won his Academy Award in 1965 for his editing of the movie classic “Mary Poppins”.