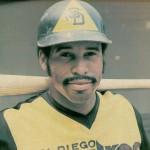 Inducted in 1998, Dave Winfield played his first eight of twenty-two major league seasons in San Diego from 1973-1980, representing the Padres in four of twelve consecutive All-Star Game appearances (1977-1988). At six foot six, strong armed and fast, he was drafted in three sports (baseball, basketball and football) from the University of Minnesota, where he was Most Valuable Player of the 1973 College World Series. Winfield graduated to the Padres without ever playing in the minor leagues. He joined the New York Yankees as a free agent in 1981 and won a World Series with Toronto in 1992. He retired after the 1995 season with a career batting average of .283, 3,110 hits, 465 home runs, 1,833 RBI, 223 stolen bases and seven Gold Gloves.