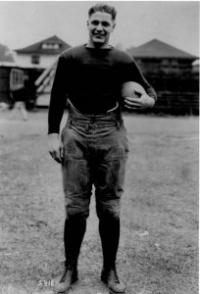 Football – Inducted into the Breitbard Hall of Fame in 1974

Leo was a football and basketball standout at USC in 1920, ’21 and ’22. He was captain of the Trojan football team that defeated Penn State in the January 1, 1923 Rose Bowl game and was selected Player of the Game as a two-way lineman. He was described by the media covering that contest as “the equivalent of a playing coach. By adroitly shifting the Trojan defense, he succeeded in checking the Lion rush.” He also intercepted a Penn State pass just as the Lions were making a move to get back into the game. Following graduation from USC in 1923, he was an assistant coach for the Trojan football, basketball and baseball teams, and helped develop the players who became the first national championship eleven selected nationally in 1926. The next ten years were spent developing championship-caliber players and teams at Whittier College, Idaho and back at USC. In 1937, he was selected to the all-time USC team.

In 1935, Leo had began a seven-year association with San Diego State as football coach, where he helped the Aztecs to several Southern California Conference titles and a 34-22-4 overall record. The final game he ever coached was a stunning 12-6 upset of Amos Alonzo Stagg’s powerful College of the Pacific team in a game played on the night before Pearl Harbor was attacked.

At the outbreak of WWII, Leo entered the Navy and served locally as commander and director of the 11th Naval District’s Recreation Department. Following the war, he served as the San Diego Parks and Recreation Department’s first director, supervising the development of Mission Bay Park and the Torrey Pines municipal golf course.

Leo was a charter member of the Breitbard Athletic Foundation and served as Executive Director of the Hall of Champions from 1960 until his retirement in 1974.

A publication from the University of Idaho says this about Leo: “In the spring of 1929, a new football coach who would make many friends came to the University. He was Leo B. Calland. A widely-read man of culture, he was at home among the scholars. He discussed the exploits of Gengis Khan authoritatively as he he did those of Knute Rockne.”